Another game, another draw. It's now 8 draws out of their last 9 games as Liverpool conceded an 86th minute equaliser from Saido Mane to ruin Jurgen Klopp's first home league game in charge. They face Bournemouth next in the Capital One Cup on Wednesday with Klopp looking for his first win.
A lacklustre first half showed how much the Reds miss Sturridge up front with hardly any movement from Divock Origi and no creativity from Klopp's attacking midfielders. James Milner was dropping into a right back position in order to create some opportuinties for the team.
A subsitution at half time for Liverpool changed the game in their favour, with Benteke's superb header when a great cross from captain James Milner gave Liverpool the lead after 77 minutes. Klopp's side looked in control until a free-kick from the left hand side of the pitch was floated into the box, Liverpool didn't deal with the ball which was headed back across the area and turned home by Sadio Mane in the 86th minute to break Klopp's heart.
The Reds most outstanding performer on the night was Benteke. Benteke changed the game for them with his size and presence which created a lot of chances for Liverpool. Roberto Firmino also got around 25 minutes on the pitch and he too made an impact with his energy and new ideas created some openings for Benteke and others.
On the flip side though, it was another frustrating night for Divock Origi who once again didn't deliver in the first half. Origi hardly showed movement up front on his own, he didn't link others into play, lost the ball too many times and was inevitably substituted at half time for the Liverpool goalscorer Benteke.
My Liverpool player ratings:
Mignolet  6/10
Clyne 6/10
Skrtel 5/10
Sakho 6/10
Moreno 8/10
Lucas 6/10
Milner 6/10
Can 6/10
Coutinho 5/10
Lallana 5/10
Origi 2/10
Subs:
Benteke 8/10
Firmino 6/10
Ibe N/A
That's all from my blog today, I hope you enjoyed it and a new post will be avaliable to read after the Bournemouth game on Wednesday night. 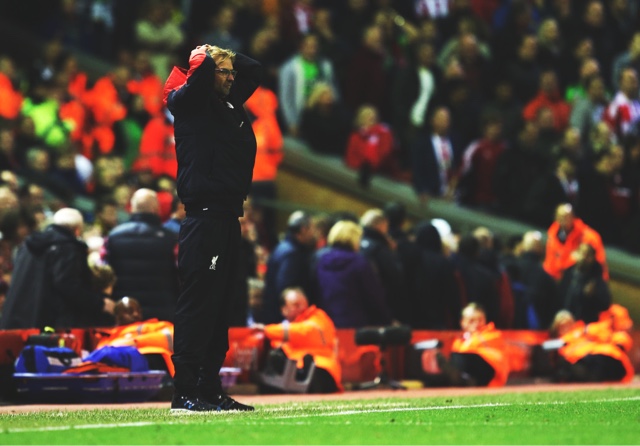